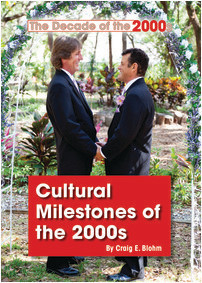 For most librarians, the first decade of the 2000s seems like yesterday, but for today’s teens, it constitutes most of their lives. This series, aimed at report writers rather than browsers, looks back on the 2000s and organizes the events and people into topics. Each title begins with the same time line, includes a list of “Words of the 2000s” (chad and hashtag), and tend to share certain topics such as Facebook, Y2K, and digital music downloading. Catastrophic Events of the 2000s of course discusses 9/11 but also covers natural catastrophes such as tsunamis and volcanoes, diseases like SARS, and travel disasters. Cultural Milestones of the 2000s, with its cover showing two men getting married, talks about pop-culture trends like Harry Potter as well as economic, scientific, and political events. = Science and Technology of the 2000s has significant overlap with other titles and discusses scientific discoveries in genetics, nanotechnology, space, and computing; it does a nice job of explaining tough concepts. Sports and Entertainment of the 2000s emphasizes entertainment over sports, discussing reality TV, video games, moviemaking, and inventions that made for drastic changes, such as IMAX and the iPod. An interesting feature of each book is brief side-by-side opposing viewpoints; for example, one contrasts views on whether there has been a “Muslim backlash.” These well-documented and clearly presented books make solid, compact resources for students.