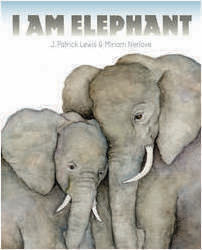 “Abundant, stylized watercolor drawings of elephants are accompanied by a sparse text in which an elephant narrator presents scattered information about both African and Asian elephants.
The book itself is well crafted, with an appealing layout on sturdy, high-quality, glossy white paper. The large, sans-serif print stands out expertly, and the complementary art is reproduced in colorful, detailed glory. This attention to production and the limited number of poetically arranged words—none of which are scientific—make the book appear to be a young child’s introduction to a representative of a magnificent, endangered species. Indeed, most of its initial text and art support this idea. For example: “Someday, I will be like my mother and grandmother—slow-motion majesty.” Nice, too, to learn the Greek derivation of elephant and to have passages citing positive references to the animals from both Hindu and Buddhist traditions. However, the penultimate and final double-page spreads take a deeper, darker turn in both text and art. Instead of a sweet ending to lull children into bedtime, it is the stuff of nightmares. There are other, better books that will encourage children’s interest in elephant conservation, including Elephants Walk Together, by Cheryl Lawton Malone and illustrated by Bistra Masseva(2017), and Thirsty, Thirsty Elephants, by Sandra Markle and illustrated by Fabricio VandenBroeck (2017), for the youngest, and The Elephant, by Jenni Desmond (2018), for slightly older readers.
Lyrical and disturbing.”