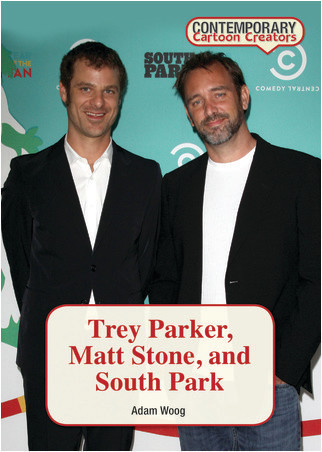 From the Series Contemporary Cartoon Creators

Trey Parker and Matt Stone are the bad-boy creators of cable TV's outrageous, controversial South Park, which many condemn but others think is the sharpest, funniest social commentary on television. Love them or hate them, Parker and Stone have produced a wildly successful show that is one of the longest-lived animated series on television.

Finally, a biography series about people who really matter to kids—cartoon animators.The titles in the Contemporary Cartoon Creators series not only look at the childhoods, influences, and careers of the creators but also highlight their struggles and determination to turn original ideas into award-winning cartoons.Matt Groening and The Simpsonsexplains how Groening’s work with comics led to the development ofThe Simpsonsand why the show continues to be successful after 25 seasons.Seth MacFarlane and Family Guydiscusses MacFarlane’s evolving role in the creation ofFamily Guy, including voicing many of its characters, as well as how he has branched out into other cartoons, television shows, and films.Stephen Hillenburg and SpongeBob SquarePantsemphasizes how Hillenburg’s early career in marine biology shaped his signature character and the child-friendly innocence ofSpongeBob.Trey Parker, Matt Stone, and South Parkunderlines these creators’ nontraditional work style and the controversies they’ve incited inSouth Parkand other works. Complemented by color photos of the cartoonists and their groundbreaking characters, the books draw attention to the social commentary often seen in these shows and how their creators have responded to criticism and controversy.They’re scholarly enough for serious biography studies yet plenty of fun for leisurely readers.—Angela Leeper