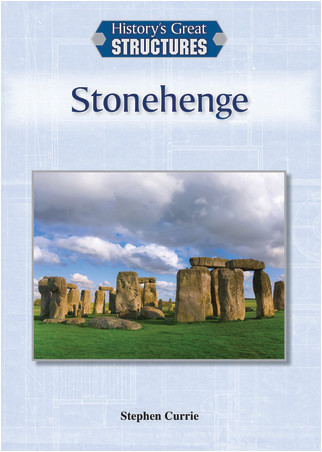 From the Series History's Great Structures

Built in stages over a period of 1500 years or more, Stonehenge is one of the most famous--and most mysterious--of all ancient structures. Theories of its origins have ranged from Romans to aliens and from religious sects to people of the Stone Age. Today we know more about it than ever before, but some of the basic riddles of Stonehenge may never be fully answered.

Whether for their timeless beauty, engineering feats, or enduring mysteries, the books in the History’s Great Structures series pay tribute to some of the world’s most fascinating architectural achievements. Complemented by color photos and reproductions, the interesting and accessible texts describe each structure’s significance, the materials and engineering skills used, and the workers behind the construction. The Palace of Versailles explains how King Louis XIV expanded a royal hunting lodge outside of Paris into one of the most ornate palaces in the world. The Panama Canal not only focuses on the American ingenuity used in building this revolutionary shipping canal but also the political conflicts between the two vested nations. Roman Roads and Aqueducts contends that “the chief Roman art was engineering” as it expounds on the elaborate network of waterways and roads that helped create an empire before modern technology. Stonehenge concentrates on the numerous theories surrounding its builders, construction, and usage, from religious ceremonies to alien visitation. A concluding chapter always looks at the future of each structure, including its legacy and continuing environmental and human threats. Other features include a time line, maps, related sidebars, facts about the architecture, and a bibliography. Students will find this series useful for world history, art, and science alike.