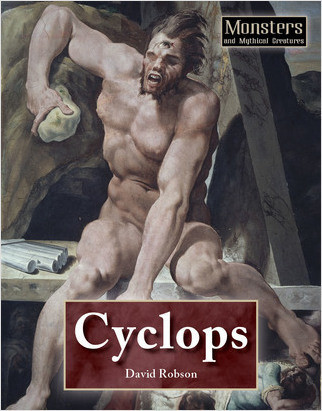 From the Series Monsters and Mythical Creatures

From Ancient Greece to contemporary culture, the mythical Cyclops has long fascinated readers. Ugly and one-eyed, the Cyclops is known the world over as a primitive and ferocious creature who consumes human flesh and terrorizes whole communities. Today, writers and filmmakers continue to use the classic image of the Cyclops in everything from comic books to big budget Hollywood movies. Although visions of the monster have changed over time, the Cyclops remains one of the best known and most feared creatures of all time.

Who doesn’t like a scary story? Students will enjoy reading these titles for their information about mythological creatures as well as the potentially “real” varieties. To satisfy this fascination these titles provide stories, pictures, and speculation on the existence of monsters. This series is an interesting alternative to all of the vampire books which are so popular today. Color photos and drawings as well as sidebars and source notes add information. Bibliography. Websites. Index.

Gr 8 Up Well written and well researched, each title describes the characteristics of a monster: its origins in literature or lore, its physical appearance, instances in which people believe they interacted with it, and hoaxes. Occasional “Did You Know?” sidebars offer compelling factoids such as, “The ancient Chinese traded a substance said to be dragon saliva to use in making perfume” (Dragons). The authors consistently use the words “myth,” “literature,” and “folklore” to drive home the idea that the creatures in question are not real. As in the “Unexplained Phenomena” series, the title on demons is a poor fit for a series aimed at young readers, even teens, since few people actually believe in the existence of aliens, dragons, and the like, but some religions teach that demons are real. Also, while the other volumes describe a goblin’s appearance in J.R.R. Tolkien’s “Lord of the Rings” trilogy and how Greeks imagined a Cyclops looked, Demons deals with possessions, exorcisms (one of which resulted in a 2005 crucifixion), Ouija boards, and spirit communications in the modern-day world. A few series are standouts. Bellwether Media’s “The Unexplained” showcases informative yet accessible writing and attractive layout designed to appeal to struggling readers. QEB’s “QEB Unexplained” offers potential curriculum tie-ins. ReferencePoint’s “Monsters and Mythical Creatures” is well written and its research is documented. Because that series is the only one that cites its sources, the others reviewed here will have limited use for reports and research. Still, monsters, aliens, and the like are of perennial interest to many young readers, so it behooves librarians to consider some of the titles for recreational reading, except the ones about demons, as mentioned above.