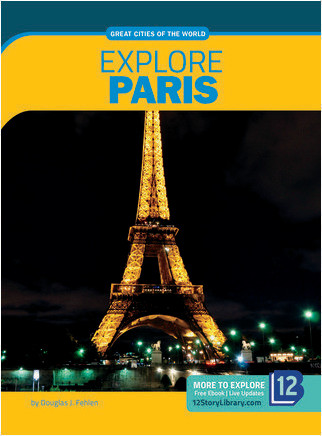 From the Series Great Cities of the World

Great Cities of the World visits 12 dynamic cities in 12 countries on 4 continents. Each title spotlights a single urban center: Beijing, Berlin, Delhi, Dubai, London, Mexico City, Moscow, New York, Paris, Sydney, Tokyo, or Toronto. Chapters cover geography, history, people, economy, architecture, infrastructure, arts and culture, sports, main attractions, food and shopping, daily life, and celebrations. Readers gain a sense of what each city is like and a heightened awareness of the world beyond the one they know.

Series Review: Young readers will travel around the globe to explore some of the largest and most diverse cities in the exciting Great Cities of the World series. In Explore Berlin, travelers will visit Germany’s capital and learn about its long and difficult history, as well as focus on technology and research and its growing population. Explore Delhi introduces readers to Delhi’s complex past, its incredible architectural and cultural landmarks, as well as the financial struggles some of its people face. The United Arab Emirates enter the spotlight in Explore Dubai wherein readers will discover the city’s intriguing mixture of old and new architecture, its high-tech nature, and its move toward becoming a cleaner, greener city. In Explore Mexico City, travelers will visit Mexico’s capital and learn about its history and geography, rapid population growth and subsequent wealth inequalities, as well as its diverse foods and culture. Each title is broken into topical two-page spreads with easy-to-read information on such subjects as the city’s history, location, economy, infrastructure, culture, and pastimes. The information is neatly organized and paired with colorful photographs and additional fascinating facts and statistics. Each book also contains a list of fun facts, a location map, a glossary, and suggested titles for further reading. A solid, well-detailed series for young readers beginning to research major cities. – Selenia Paz