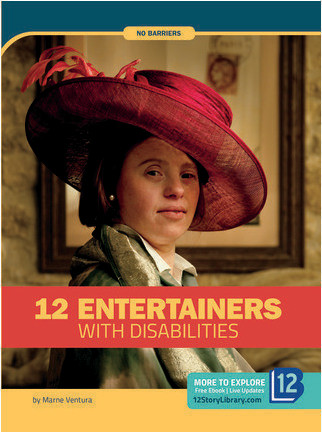 No Barriers: 12 Entertainers with Disabilities

From the Series No Barriers

The No Barriers series profiles nearly 100 individuals with disabilities who found success in all kinds of professions and pursuits. These include people from history and the present, and from countries around the world. Each title features a diverse selection of 12 men and women, focusing on their challenges and contributions as adventurers, artists, athletes, business leaders, entertainers, members of the media, politicians, and scientists. Blind almost from birth, Stevie Wonder became one of the worldХs greatest musicians, a 25time Grammy winner beloved by millions of people. Daniel Radcliffe overcame a learning disability to play the lead in the Harry Potter films. BritainХs Sarah Gordy has Down syndrome and a successful acting career. This book spotlights 12 entertainers from around the world who are living their dreams despite their disabilities. Each chapter includes attentiongrabbing photos and fascinating facts. Sidebars go beyond the basics, and prompts invite readers to think for themselves. A Learn More page zooms in on the topic of service animals.