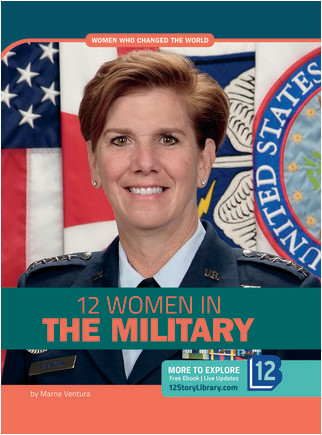 Women Who Changed the World: 12 Women in the Military

From the Series Women Who Changed the World

The Women Who Changed the World series profiles inspiring, influential women who challenged stereotypes, overcame barriers, and opened doors. Some were the first women in their fields. Some rose to the top of professions, companies, or nations previously run or dominated by men. Some were activists, some were queens, some quietly did their jobs. Each title includes a diverse selection of 12 women who had a lasting impact: on the arts, business, education, entertainment, equality and social justice, the media, medicine, the military, politics, science and technology, the space industry, and sports. From General Lori Robinson, commander of NORAD and NORTHCOM, to French heroine Joan of Arc, navy officer Grace Hopper, the mother of computing, and Celtic warrior queen Boudicca, this book profiles 12 women in the military from around the world. Each chapter includes attentiongrabbing photos, biographical details, and fascinating facts. Sidebars go beyond the basics, and prompts invite readers to think for themselves. An Out of the Shadows section features minibios of women in the military who never got the recognition they deserved.