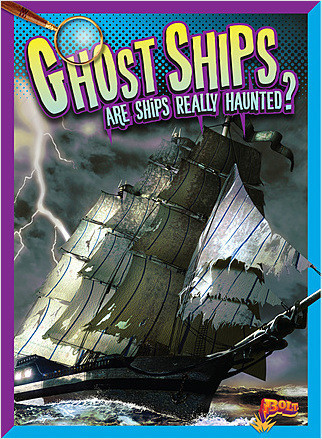 From the Series History's Mysteries - Fall 2020

The past is full of mysterious events. How did ancient people build pyramids. What is Stonehenge for? Maybe the explanations for these events are simple … or maybe there's something strange going on. Explore history's mysteries through closely level text, dynamic imagery, and visual infographics. Uncover the mystery of ghost ships with diagrams, strong photos, and hi/lo text.

Series Review: ea vol: 32p. (History’s Mysteries). further reading. glossary. index. photos. websites. Black Rabbit. Aug. 2018. lib. ed. $32.80.
Gr 1-3–This visually appealing series includes a diagram of the inside of Tutankhamun’s tomb, an explanation of how peat bogs are formed, and a drawing indicating the phases of construction at Stonehenge. Some critical questions, as, for example, which theory of dinosaur extinction is most plausible, are left unanswered for readers to consider. In some cases—sightings of ghost ships, a cursed tomb—critical judgment can be suspended in favor of tantalizing exposition. Each volume concludes with a sequence of reflection prompts, such as “What do the mummies’ burials tell you about them?” or “Why did dinosaurs die out?” In addition to a glossary and index, each volume features a short bibliography of books and websites for further exploration. VERDICT Recommended, but, due to occasional vagueness of detail and light treatment of the supernatural, better suited to independent reading than careful study.