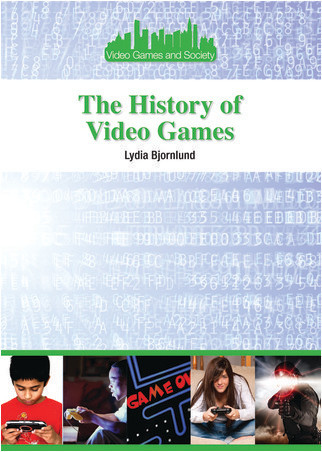 The History of Video Games

From the Series Video Games and Society

Bjornlund’s so-so introduction to gaming devices lacks the specificity to engage the average reader. Through arcade games, Pong, Atari, and Nintendo, she works up to the allure of console toys and fantasy film without capturing the psychological hook that keeps players amused. By drifting into fantasy film, she abandons the initial subject. Nakaya’s analysis of electronic games and their impact on children and teens balances the summation with commentary on violence and educational value. Coverage of rating systems and proposed legislation to curb mounting aggression in players exposes the failed efforts of lawmakers and parents to supervise use. Images and sidebars cite examples of deaths connected with such titles as “Mortal Kombat.” The bibliography quotes recent research and events. Indexing lists entries on mass shootings, addiction, marketing, and specific titles, e.g. “Grand Theft Auto.” A valuable source, this book belongs in public and middle school libraries as well as the professional shelves of counselors and home schoolers. Netzley’s link between electronic games and crime makes a similar effort to establish motivation for felonies and concludes that opinions vary, from school psychologists to the National Rifle Association. Images shore up arguments, particularly photos of role playing and pornographic factors. More forcefully stated than Nakaya’s conclusion, this book discloses the heart of concerns about school shootings and brutal video games. It is recommended for school and public libraries.

Humans have played games for centuries, and the thorough titles in the Video Games and Society series explore some of the numerous issues related to today’s popular pastime. The History of Video Games provides a detailed look at the nonlinear growth of the video game industry, beginning with the earliest video games developed as an accidental offshoot of initial computer research and noting such important factors as big personalities and market economics. How Do Video Games Affect Society? discusses the conflicting research regarding physical and social costs and benefits associated with gaming, as well as how gaming can become an addiction. Video Games and Youth focuses on the divided research concerning gaming and its effect on children and teens, especially the impact of playing violent games and connections between gaming and health and learning. Video Games, Violence, and Crime examines the relationship between gaming and mass shootings, antisocial behavior, and mental illness, highlighting the disagreement on a cause-and-effect relationship between violent games and violent crimes. A final chapter in this book addresses legal responses to gaming issues. Accompanied by color photos and related quotes and sidebars, these titles offer a balanced view of the topics, while additional back matter presents resources for these useful debate guides.