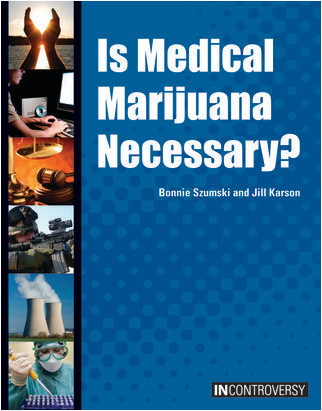 From the Series In Controversy

Scientists are discovering new potential uses for marijuana in the treatment of many diseases. Yet many are concerned with the growing trend of allowing people to use medical marijuana and whether its use could lead to addiction and other problems. Intro…Through objective discussion, numerous direct quotes, and full-color illustrations this title examines What Are the Origins of the Medical Marijuana Debate? Is Marijuana Effective Medicine? What Are the Risks Associated with the Medical Use of Marijuana? Is Marijuana Effective Treatment for Depression and Other Mood Disorders? How Should the Medical Use of Marijuana Be Regulated?

The In Controversy series continues to be a boon both to teens on a tight research time line or those who may be intimidated by longer books on controversial topics. Each book explores one aspect of a debate; for instance, instead of discussing marijuana in general, the series entry focuses on medical marijuana. How Does Cell Phone Use Impact Teenagers? discusses the physical and emotional risks associated with teen cell-phone use, including sexting, bullying, and dangerous driving. How Should Sex Education Be Taught in Schools? includes a chapter on homosexuality but focuses much more on the need for teaching how to avoid pregnancy and sexually transmitted diseases. Is Medical Marijuana Necessary? is less teen-centered than most of the titles, since most of the medical problems marijuana helps with arise later in life, but teens seeking information will find this fair and enlightening. The topics of Facebook, Twitter, and texting are thoroughly covered elsewhere, but Is Social Networking Beneficial to Society? focuses nicely on the ways this technology is changing not only individuals but also society. The authors use a calm, measured tone and include plenty of quotes from authorities to provide balance. Meanwhile, photographs and boxed quotes in the margins add to the appeal, making the substantial information approachable.