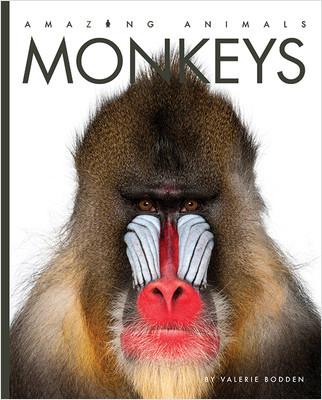 From the Series Amazing Animals

From winged bats to furry wolves, and from leaping dolphins to stalking lions, the world of animals is wonderfully diverse. This popular series travels the planet to study these and other fascinating mammals, birds, reptiles, fish, and invertebrates. Beautiful photos are paired with STEM-appropriate text to examine the featured creatureХs appearance, habitat, behaviors, and life cycle. Each reissued title also presents a folk story that people have used to help explain the animalХs appearance or behavior. This revised edition surveys key aspects of monkeys, describing the playful primatesХ appearance, behaviors, and habitats. A folk tale explains why these creatures look almost like people.

Book Review: These titles in the “Amazing Animals” series (10 new titles) reveal why even some of the world’s most well-known animals are indeed extraordinary. Double-page spreads are comprised of one page with large text made up of a few short sentences and a facing full-page, color photo of the animal in action. The spreads cover such topics as the animal’s physical characteristics, habitat, movement, and diet, as well as how the female gives birth and raises young and where humans might typically see the animal (e.g., in caves or at the zoo). Monkeys describes both common traits among all monkeys, such as living in groups or grooming each other’s fur, and some of their variety, including size, habitat, and diet differences. Though undocumented, a brief folk tale about the animal concludes each book. The series’ content and design work together to develop and encourage young science readers.